Space Pi and Life on Mars


We added biospheres for living and growing crops and a swimming pool to relax. We captured life on our planet using a Raspberry Pi and a pi cam that we put together as a stop motion studio. 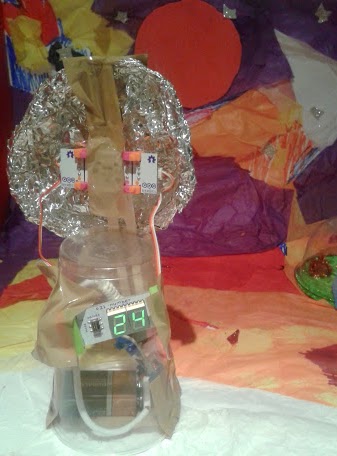 By the end of the session we had our own satellite dish engineered from a LittleBits Space Kit. Ready to broadcast those first reports and give the people left on Earth a unique insight to life on Mars in 2025.


What will the journey from Earth to Mars
be like for those first astronauts? Here is
a short clip from the film 'Roving Mars'
that follows the journey of the Mars Explorer Rover Spirit from launch to landing on Mars. Much of the footage is computer generated
but based on photos and data from other
Mars rovers and probes.

Would you leave Earth to go and live on another planet?

Popular posts from this blog

Butterfly Pi and the Great Escape

June 30, 2014
We did it! We captured the moment our Painted Ladies emerged from their chrysalides using our Butterfly Pi. There really is a Pi and Pi cam buried in that awesome Lego housing!     Why don't you put your Raspberry Pi to use this Summer and capture what nature is doing in your back garden! Don't forget to share it. #makerfun #raspberrypi It was a lovely sunny day when we released the butterflies and we couldn't believe what happened next. Our Painted Ladies crept up onto the girls fingers for a little help with their great escape.  They were in no hurry to leave and we were all fascinated by the chance to observe them before they finally flew away.  I t was a magical metamorphosis. We raised 5 very hungry caterpillars that ate so much they exploded to eight times there original size. They hung upside down and turned into Chrysalides. Check out our Caterpillar Pi video  too. Before finally emerging as beautiful butterflies.  The Butte
Post a Comment
Read more

June 18, 2014
A few weeks ago the kids got a butterfly hatching kit from their favourite aunt.  Can you guess what our caterpillars got up to last night? As you can see caterpillar  number three became a chrysalis! Now we have three chrysalides and a crazy, hungry caterpillar still throwing shapes into the night. How did this happen? The caterpillar hangs in a 'j' shape and sheds their exoskeleton for one last time before hardening into a chrysalis.  We hope to capture the birth of our butterflies in a week or so time. How did we do it? We hooked up our pi with pi-camera and attached an eye- glass to shorten the focal length of the pi-camera.  We used a cold light to light up the scene into the night. Check out our lego housing. We can change the height of the camera using the gears! We modified an existing time-lapse program.  There is lots of great stuff out there:  For inspiration and to discover other great projects see:  Raspberry Pi foundation . For local events
Post a Comment
Read more

April 03, 2014
The fun is endless when you create dragon snot and slime! Step 1. First design you dragon Step 2: Make your dragon snot. We had lots of fun! We are going to put our recipes online soon so that you can share them with your friends. Sign up to our newsletter and you will be among the first to find out.  We will be back in Marple in June, don't stop making!
Post a Comment
Read more

Maker Fun
I set up Maker Fun to get kids inventing, designing and making cool stuff for fun! We use crafting activities as a starting point for digital making. We also explore creative starting points for coding and progamming activities. This year, work took over and I'm having a micro:bit adventure!